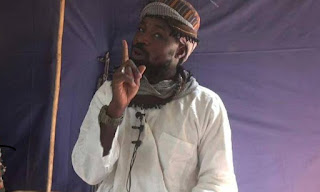 – A 40-year-old man has promised to take a walk of victory should the troops of the Nigerian Army captured the Boko Haram leader Abubakar Shekau – Deji Oladimeji said this in reaction to the military’s recent successes against the terrorists’ group – According to Oladimeji, he does not mind embarking on the victory walk from Lagos to Maiduguri A native of Ijebu-Ode in Ogun State, Deji Oladimeji, has vowed to march from Lagos to Maiduguri should the Nigerian Army capture Boko Haram leader, Abubakar Shekau alive. Oladimeji, who resides in the Ajah area of Lagos, disclosed this while reacting to the Army’s recent feat against the fleeing terrorists. In the last one week, the troops of Operation Lafiya Dole, have shown aggressive gallantry and bravery, crushing the insurgents at every instance. No fewer than 150 lost their lives when an attempted attack turned to soar in Buni Gari, Yobe State, as they met superior fire from the troops. Boko Haram:

Lawmaker gives Army pass mark, upbeat about victory At the thick of things is Chief of Army Staff, Lieutenant General T.Y Buratai, who recently relocated to the Theatre of Operations to lead the final clearance.

There are reports, however, that Shekau suffered heavy bruises from the multiple offensives which have so far consumed some of his top generals. Military authorities reveal that Shekau’s body language is that of one ready to surrender. “If you talk about body language, the body language is there. If he makes any move in that regard, you will know but from the onslaught from troops, they can’t hide anymore,” Coordinator of the Directorate of Defence Media Operations (DDMO), Major General John Enenche, said. Although the military added that there was no official contact with the terror leader yet, Nigerians have kicked against such move, calling on the troops to finish him once and for all. However, Oladimeji, who is a popular businessman in his neighbourhood wants Shekau captured alive.