Skip to content
You are here
Nigerians have expressed anger at a Lagos-based ‘lawyer’ and critic, Adeola Samuel-Ilori, after he was disowned by the Nigerian Bar Association. 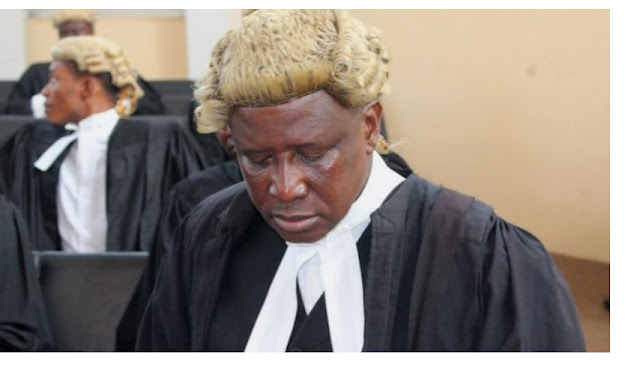 Lawyers and activists, who took to different social media platforms, said they were also shocked that Samuel-Ilori refused to respond to the disclaimer after several days.
Our correspondent learnt that the ‘lawyer’ had switched off his phones and had remained incommunicado since the story broke.
A top source said Samuel-Ilori had gone into hiding to forestall a possible arrest by the police.
PUNCH Metro had exclusively reported that the NBA said Samuel-Ilori’s name could not be found on the enrolment list of lawyers with the Supreme Court of Nigeria.
The Ikeja, Lagos branch of the association, also said he was not a member of the group.
However, Samuel-Ilori is said to be the Principal Partner of Lead Solicitors, a chamber of legal practitioners, in the Ogba area of Ikeja, Lagos.
He was also said to have filed civil suits in court and claimed on several forums and in the media that he was a lawyer.
His denial by the NBA drew a flurry of reactions on the social media, as many Nigerians expressed dismay.
On PUNCH Online, one Akinlaja wondered why it was difficult for him to refute the NBA claims.“In fact, we don’t need to see his certificates. Let him just mention five of his classmates from the university to the law school. If all of them can confirm that they were in school with him to study law, I will take it hook, line and sinker,” he wrote.
Another reader, Tayo Johnson, wondered why the NBA had not taken further steps on the matter.
“Why can’t the NBA challenge him officially if his name is not on their record? They have the statutory obligations to hold such information as the umbrella for all lawyers. If his name is not on their record, he has to provide the reason(s),” he wrote.
A public commentator, Ettu Mohammed, who posted the report on his Facebook page, said Samuel-Ilori was fond of calling out Nigerians with fake academic credentials.
Another Facebook user, Posi Tunbosun, wrote, “The professional bodies in Nigeria have also created this nonsense opaque way of life. Can I (know) whether a Nigerian lawyer can practice online? No. All the professional bodies that I belong to in the UK have my name listed on their websites, so that anyone in any corner of the world can search and confirm this without paying a dime. Continue to enjoy the nonsense country o jare.”Another user, Jimmy Abia, said he would not be surprised if Samuel-Ilori was fake.
“I once featured in a programme with him and had my doubts based on certain things he said on that occasion,” he added.
Another user, Adebiyi Olajide-Mackson, said he disagreed several times with Samuel-Ilori on legal issues.
He noted that Samuel-Ilori had been using a particular television station to deceive the public.
PUNCH Metro learnt that the ‘lawyer’ had refused to respond to enquiries from members of some WhatsApp groups he belongs to.
A source said a terse statement he posted blamed the report on the handiwork of a powerful cabal, who wanted to pull him down.
He was also said to have called for prayers, saying he was in a critical time of his life.
However, he reportedly parried questions on the disclaimer.
Charles Afolabi, a lawyer whose NBA seal was used in a suit filed earlier by Samuel-Ilori, said he also needed some explanation from the man.
Afolabi clarified that he was only a “professional colleague” and not an employee of the accused.
The General Secretary of the NBA, Jonathan Gunu Taidi, said on Saturday that the association had not changed its stance.
He said he was certain that Samuel-Ilori’s name was not in the Supreme Court register.
“If you are a lawyer and your name is not in the database that we have, then where will you get it from, because our records are derived from the Supreme Court? Whatever manual records they have, they transferred to us. So, if it is not in the database, where will he get it?” he queried.
Taidi said Samuel-Ilori had yet to provide copies of his records, especially his call to bar certificate.
The NBA secretary insisted that Samuel-Ilori was not a lawyer.A top source said the embattled man had become unreachable on his telephone lines.
The source said, “Why nobody suspected anything was because he also claims to be an activist. Many people are dumbfounded at this revelation.
“He has gone into hiding. His lines have been switched off. He is not talking to anybody or responding to messages. He does not talk on the social media again.”
Samuel-Ilori’s known line by our correspondent was indeed unreachable when attempts were made to call him on Saturday, and the last time he was active on Facebook was April 27, 2020, a day before the report was published by PUNCH Metro.
The spokesperson for the Lagos State Police Command, Bala Elkana, said the police had started investigating the matter.
While calling for calm, he stated that the public would be informed of the outcome of the investigation.
“We have initiated investigation based on The PUNCH’s report. We will do our best to get to the root of the matter,” he added.