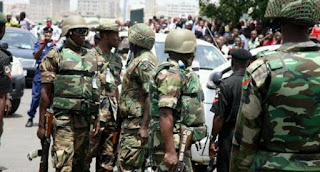 The prevalent peace in Bomadi town, the administrative headquarters of Bomadi Local Government Area was shattered in the early hours of today, following a bloody clash between soldiers and policemen who were on patrol to enforce lockdown compliance in the area. A soldier was killed and a policeman injured.

The initial argument between both parties over violation of lockdown rules that later became heated up before turning violence resulted in the killing of a soldier shot at a close range in retaliation to a policeman who was hit in the stomach by the bullet from the soldier’s rifle.
The injured police officer identified as Sergeant Chukwudi Osuali, said to be in critical condition is currently receiving treatment at the intensive care unit of the General hospital, Ughelli, where he was being rushed to by his colleagues.
Daily Sun sources close to the scene of the incident disclosed that trouble started at about 12:15am on Thursday when the policemen under the Eagle Net Operation observed that some persons were still outside their homes making merry in a spot along the popular NDDC road in Bomadi, close to a military unit.
According to the source, the police team inquiry to why the people would be violating the lockdown rule to be drinking and smoking this that late met with strong resistance by the soldiers who insisted that the police does not have the right question those hanging out close to its unit.
“This persistence of the police team to disperse the those at the place later infuriated one of the soldiers who went into the soldier’s shelter brought out his rifle and shot a policeman right at the stomach”.
“Vexed by this action and seeing a member of their own, a member of the police patrol team opened fire on the solder in retaliation and killed him on the spot”.
“The police team immediately moved their fallen colleagues to the intensive care of the General hospital, Ughelli for medical attention”.
In a swift reaction to the incident, the Commander, Sector 1, Operation Delta Safe, Col. Habib Manu, who immediately moved to the area to douse tension assured that there would be no further reprisal attack by the soldiers on the incident”.
He noted that Army high Command would commenced further investigations into the matter to ascertain the true position of what transpired”.Addressing his men at Bomadi, Col. Manu, urged the soldiers to go about their duties diligently while the authorities initiates full scale investigations into the case. (Daily Sun)
ADVERTISE YOUR PRODUCTS AND SERVICES
FOLLOW US ON
TWITTER  @Paul65084696
INSTAGRAM @e-mageoutlets