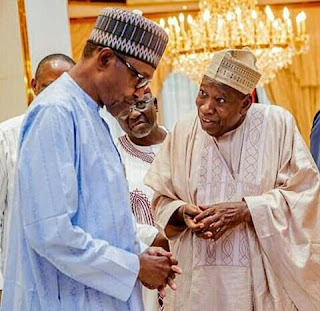 Kano State has not recorded any new case of coronavirus infection in the last 48 hours, EMAGE NEWS reports.
This is happening despite the disturbing record of deaths resulting from “strange illnesses” in the last few days.The state government has attributed the “unusual deaths” to malaria and diabetes while the state Health Ministry announced two COVID-19 deaths on Monday afternoon via Twitter.
But the Nigeria Centre for Disease Control in its daily updates on April 26 and 27 has not recorded any new case or death for the state.The centre announced 91 new cases on April 26 with distribution as follows: 43 in Lagos; eight in Sokoto; six in Taraba; five in Kaduna; five in Gombe; three in Ondo, Abuja Edo, Oyo, Rivers and Bauchi each; two in Osun; one in Akwa Ibom, Bayelsa, Ebonyi and Kebbi each.
It also announced 64 new cases on April 27 with 34 in Lagos, 15 in Abuja, 11 in Borno, two in Taraba and Gombe each.Meanwhile, the President, Major General Muhammadu Buhari (retd.), has ordered a total lockdown of Kano for 14 days.Buhari stated this during his live address to the nation on Monday night noting that the Federal Government would support the state in containing the pandemic.“With regards to Kano, I have directed the enforcement of a total lockdown for a period of two weeks effective immediately. The Federal Government shall deploy all the necessary human, material and technical resources to support the state in controlling and containing the pandemic and preventing the risk of further spread to neighbouring states,” he said.
As of April 25, the last time the NCDC announced any case for Kano, there were 77 confirmed infections in the state.